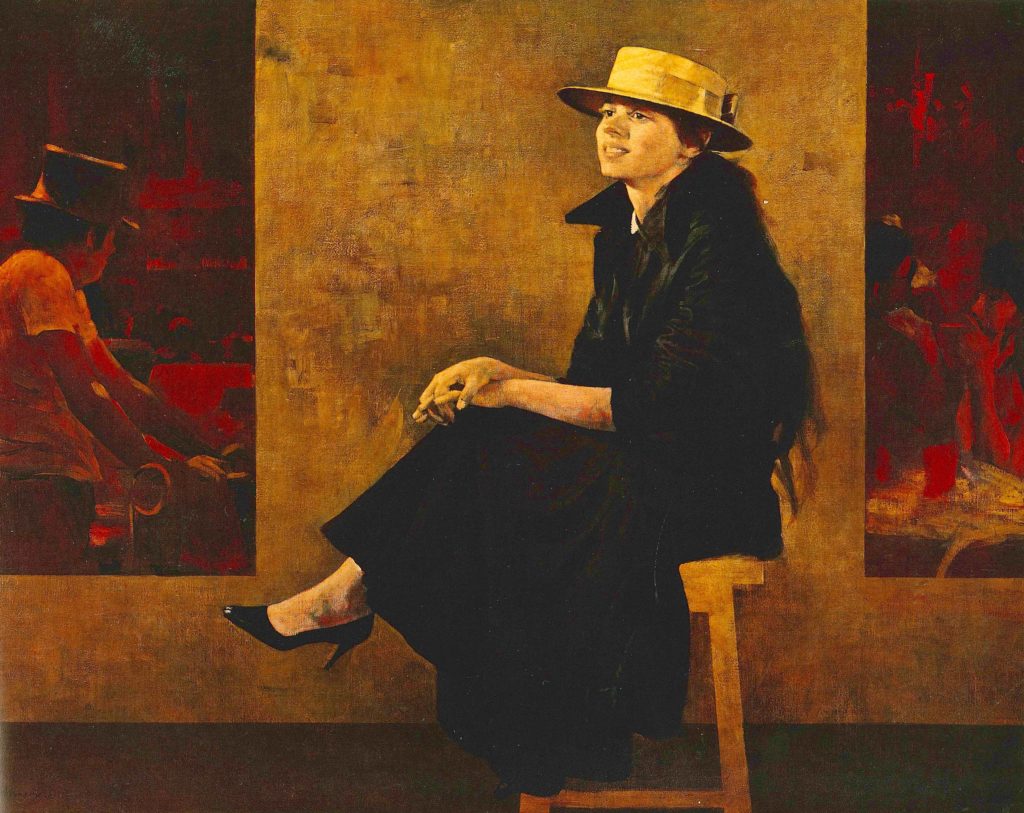 Let the art historians or critics speak about Marc’s art, his talent as the portrait painter, and his gifts as an innovator. Let them explain how he strives to unite present and past, colors and memories. As one who loves stories, I love those which he shows in order to make us smile, weep, or dream.

Marc Klionsky (1927-2017) was a Russian-American artist who worked in New York City from his immigration in 1974 until his passing in 2017. Klionsky developed a style of American Realism uniquely defined by his classical training in the Soviet Union and his perspective of daily life in New York and America.

Born in Minsk, Belarus, Klionsky lived for nearly fifty years in Soviet Russia. As a child, he attended the Art School for Gifted Children in Minsk. During World War II, Klionsky’s family was evacuated to Kazan, Tatarstan, where Klionsky began to earn a living producing anti-Fascist posters and illustrations for local newspapers and other publications. As well, Klionsky studied at the Drama Institute at the Kazan Theater, where he primarily focused on developing costume designs for various productions. After the war, Klionsky attended the Academy of Fine Arts in Leningrad. His diploma piece was reproduced in an edition of 50,000 copies. Klionsky received his PhD in 1957, during which period he studied with Professor Boris Ioganson. Klionsky became the youngest artist to be exhibited at the Tretyakov Gallery in Moscow. During this period, Klionsky met his future wife of nearly 59 years, Irina Klionsky (née Korolik), with whom he had two daughters, Nadia and Elena.

Klionsky established himself in the Soviet Union initially by producing official Social Realist works that depicted political figures and daily life in the Soviet Union. However, in the privacy of his own studio, he began to explore the theme of anti-Semitism, and the Holocaust. He soon discovered the intellectual restrictions of working as an artist in the Soviet Union.

Emigrating with his family in 1974, first to Rome and then to New York, Klionsky expressed in his work the newborn freedom that he found in America. Shortly after his arrival, he was recognized in an ABC television production about his work, “Canvases of Freedom.” This was followed by a U.S. State Department documentary (produced by the U.S. Information Agency) shown in ninety-two countries about one of his exhibitions at Hammer Galleries. During this period, Klionsky also taught at the School of Visual Arts in New York and at the Pennsylvania Academy of Fine Arts in Philadelphia, birthplace of the Ashcan School of American Realism.

While Klionsky took advantage of his creative freedom in the United States to explore a range of abstract styles and media, he ultimately gained prominence as a master of portrait painting and of American Realism. His works include portraits of leaders in the world of politics and humanitarianism, such as Golda Meir, Elie Wiesel, Prince Bandar Bin Sultan, and Vernon Jordan; music, including Dizzy Gillespie, Mstislav Rostropovich, and B.B. King; business leaders Armand Hammer, Steve Forbes, and Dwayne Andreas; and many others. His portraits are in the permanent collections of The National Portrait Gallery in Washington, D.C., the Russian Museum in St. Petersburg, and the Museum of Contemporary Art in Lausanne, Switzerland. Klionsky was also honored during his lifetime to have been selected to sculpt the Nobel Peace Prize Commemorative Medal for his friend, Elie Wiesel.

His paintings were exhibited throughout the Soviet Union; Europe, including London, Rome, Florence, Barcelona, Berlin, Lausanne, Prague, and the Grand Palais in Paris; as well as in China, Israel, Japan, Australia, and New Zealand.

A book on the life and art of Marc Klionsky by John Russell and Nicholas Fox Weber was published in 2004, with a forward by Elie Wiesel.

The Marc Klionsky Estate is dedicated to exhibiting and preserving the art and life of Marc Klionsky. The Estate is committed to furthering the public knowledge and appreciation for Klionsky’s work by facilitating exhibitions, placements, and programs for students, institutions, and the general public.